The Ethio-Eritrea Rapprochement - a Catalyst to Hone Human Rights Profile?

The human rights profile of Ethiopia and Eritrea have been infamous. Both countries have criticised by the leading UN human rights bodies, regional and NGOs. Now, these countries are making history by torn down the wall of resentment built after bloody boarder war. Would this new chapter of rapprochement enable them to revamp their human rights profile?

Before examining the role of rapprochement for the improvement of human rights, it is worth to glance a laconic view of major events held in the past few years. Ethiopia and Eritrea have been rancorous rivals in the political economy of the Horn of Africa. (See here, here, and here).Even one accuses the other for sheltering rebels and assisting armed groups, and they were also engaging in proxy-war held in Somalia in 2006. Initially, two countries went to battlefield for an iota piece of land called Badme though the casus belli was mainly economic and other political factors. The conflict between two brotherly States reached its peak in the year 1998-2000, in turn, costed both of them inter alia, it claimed the lives of more than 70,000 people, displaced civilians, pummeled their economy, brought serious violation of international humanitarian law and waned the human rights situations. 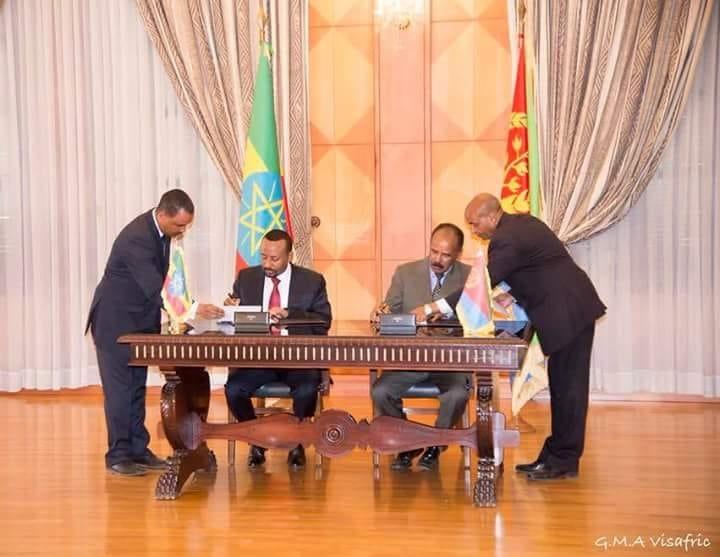 The Birth of Rapprochement

On April 2, 2018 on the occasion of making acceptance speech, the new Ethiopian prime minister, Abiy Ahmed has signaled to end the stalemate with Eritrea. Later, the Ethiopian ruling party Executive Committee decided to handover the contested Badme and intends to fully comply with the arbitral award of the Permanent Court of Arbitration. On June 20, 2018, the Eritrean government has responded to the offer by accepting the olive branch and dispatched official delegation within a short while. On July 7th, with an inbound bromance, Ethiopian delegation went to Asmera. Two days later, on the July 9, 2018 a Joint Declaration of Peace and Friendship signed to normalise the impasse. Following it, the Eritrean embassy is reopened in Addis Abeba, commercial and social relationships are (re)established. For example: the Ethiopian Airlines made a debut flight after 20 years of service suspension.

Then, the question is how the rapprochement between two countries can forge lasting peace, and hone human rights in their respective territories. What is the implication of the Joint Declaration for improvement of human rights in both countries?

Needless to say, there are many factors that might be behind the moves for the rapprochement. First, Abiy Ahmed’s Ubuntu concept of “medemer”, which literally means additions, ardently calls for reconciliation, integration without boarders and social cohesion. Though it is beyond the realm of the present blog post, the concept of ‘medmere’ seems nebulous, and needs further research. Second, the unilateral efforts of handful Arab States, such as — United Arab Emirates (UAE) might trigger both States for genuine negotiation. Third, given that two countries share common history, socio-cultural and religious ties; it would be a matter of necessity to revitalize their mutual interests since the bad history persisted between them have had a detrimental legacy in the Horn of Africa.

The New Peace Accord: Human Rights Friend or Foe?

Since the deal is a typical peace treaty, it is expected to incorporate provisions dealing with human rights. They have agreed on five points of peace but only three of them have a direct implication for human rights. The first area of agreement is the resumption of peace and friendship. Although the right to peace is not well settled under international human rights law, article 1 of the Joint Declaration have reminded the importance of peace, and normalisation of relations. Article 2 of the Joint Declaration provides ways to boost political, economic, social, cultural and security cooperation. This gestures that two States will resume socio-economic endeavors to advance the rights of their respective citizens. Possibly, they could lunch free trade deals and transport activities sooner. Once they reinstated into their previous positions, and neighborliness; the human rights to work, and other socio-economic rights will soon be deepened as formulated under article 3. The last provision that two countries agreed is regional development. Indeed, it resonates the right to development , which has both collective and individual dimensions. As such, a stipulation of such kind would reaffirm guarantees for the protection of the rights.

It can be recalled that the above commitments should be interpreted in light of international human right instruments. For instance, Ethiopia is party to seven core human rights treaties except the Convention on the Right of Migrant Workers (CMW) and Convention on the protection of all persons of Enforced Disappearance(CED). However, Ethiopia is far-flung from review by the UN Special Procedures, and severely censured. (See here)  While Eritrea is signatory to six core human right treaties with the exception of CMW, CED, and CRPD. Albeit, it has been scolded time and again before the UN human rights bodies. (See here, here and here)

State of Play: from Bitterness to Bromance?

After overcoming their hostilities, the two countries have officially started friendship. Both States met up with high level delegations twice. All these overtures propelled both States into a new chapter. As a result, two countries have to take this opportunity to show commitments for human rights and look into their inside backyard, including — start working on improving human rights, install robust institutions and accountability mechanisms.

It is praiseworthy that the new prime minster of Ethiopia has shown affirmative changes. For instance, he directed the release of political prisoners, lifted state of emergency, commenced reforming repressive laws and systems, unblocking of 264 websites, delisted proscribed terrorist organizations, among others though a lot of works remains to be done, including — ending impunity of torture, investigation of disappeared peoples, relocation and compensation for displaced peoples, reconfiguring the ‘deep state’(see here), and building robust democratic and social institutions.

Turning into Eritrea, the human rights profile remains unchanged. Ms. Sheila B. Keetharuth, Special Rapporteur on the situation of human rights in Eritrea, presented a report on the 26th of June, 2018 claimed “patterns of human rights violations ascertained over time persist namely — arbitrary arrest and incommunicado detention, indefinite military/national service amounting to forced labour, with a range of violations committed in this context, as well as severe restrictions of fundamental freedoms.” Eritrea has been using the conflict between the two countries as a governing narrative to justify mandatory conscription though it is a tenuous argument to violate its citizen’s human rights. Thus, the Isaias regime has to follow the footsteps of Abiy as to the release of political prisoners languishing on prion cells, investigate enforced disappearance, end mandatory military conscription, widen the political space and stop the mass exoduses.

Both countries should accede to Convention on enforced disappearance, in turn, show commitments to human rights. Second, they should accede to the Optional Protocol to Convention against Torture, and invite members of Sub-Committee on the Prevention of torture (SPT) to make deep investigations. Despite Ethiopia promises to reform draconian laws, again, it should strive further to bring robust civil societies, and organisations. The same applies to Eritrea. Third, both should invite UN Special rapporteurs and African Commission on Human and Peoples’ Right Special Rapporteurs for monitoring the human rights situation in their respective territories. Furthermore, both countries should work in good faith to turn the Joint Declaration into practice. In concluding, both countries should use the rapprochement as a God-sent opportunity to revamp their human rights profile.

When you subscribe to the blog, we will send you an e-mail when there are new updates on the site so you wouldn't miss them.

Sidewalks in Addis, the visually impaired, and human rights

Snapshot Review of Imperative Necessity and challenges for Implementation IHL: Part One

No comments made yet. Be the first to submit a comment